Synthetic aperture radar (SAR) is used by the Ludi Tance satellites to image the Earth in any weather situations, day or night. The satellites send out L-band radio transmissions and record the echo as it reflects off the Earth's surface. 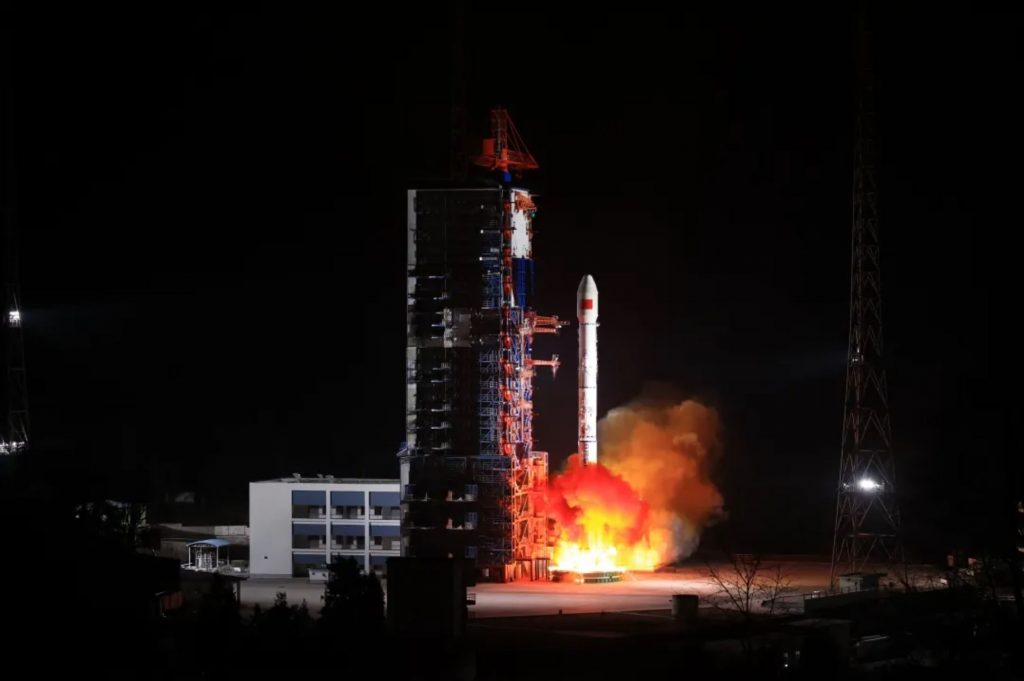 On Saturday, China’s Long March 4C (Chang Zheng 4C) launched its forty-first satellite, the second Ludi Tance radar-imaging satellite. The satellite was launched into a sun-synchronous orbit immediately after liftoff from the Jiuquan Satellite Launch Center at 23:44 UTC (07:44 local time on Sunday). The Ludi Tance-1 01B satellite, commonly known as L-SAR 01B, was launched on Saturday, after the launch of Ludi Tance-1 01A at the end of January. The two satellites are the first to be launched as part of a new Chinese civilian radar imaging constellation in low Earth orbit. Synthetic aperture radar (SAR) is used by the Ludi Tance satellites to image the Earth in any weather situation, day or night. The satellites send out L-band radio transmissions and record the echo as it reflects off the Earth’s surface. A satellite can provide higher-resolution photos with a tiny antenna by taking a series of measurements as it passes over a region of interest. An antenna measuring roughly 33 square meters is part of the SAR payload on Ludi Tance-1 01B. SAR satellites are not limited to only producing images on daytime passes over points of interest since they employ radio waves delivered by the satellite itself to illuminate a target rather than sunlight.

Furthermore, because radio waves may penetrate through clouds, a SAR system can produce valuable images in gloomy conditions where an optical imaging satellite would only be able to detect the cloud tops. The Ludi Tance satellites’ declared goals are to assist in resource monitoring, mapping, and disaster management. They’re part of China’s 2015-2025 National Civil Space Infrastructure Development Plan. Preparations for the launch of the Ludi Tance satellite. The Chang Zheng 4C (CZ-4C) rocket, commonly known as the Long March 4C, is a three-stage rocket from China’s Chang Zheng rocket family that was chosen to launch the Ludi Tance 1 satellites. The Dongfeng 5 ballistic missile was used to develop the Chang Zheng 2, 3, and 4 rockets. The Chang Zheng 2 series is a two-stage spacecraft designed for trips in low Earth orbit. The Chang Zheng 3 series, on the other hand, includes a high-energy third stage for predominantly geosynchronous launches, while the Chang Zheng 4 utilizes a more conservative third stage for sun-synchronous launches (SSO). Also Updates on Ludi Tance-1 01A SectionL2 Resources of the China Forum Join L2 by clicking here. The Chang Zheng rockets, which have their roots in China’s missile program, utilize storable hypergolic propellants: unsymmetrical dimethylhydrazine oxidized by dinitrogen tetroxide.

The fuel and oxidizer also ignite on touch, simplifying engine construction by eliminating the need for elaborate igniter systems. Solid-fuelled motors have mostly replaced them in current missiles. Hypergolic propellants, on the other hand, are exceedingly hazardous and detrimental to the environment, as well as being less efficient than propellants used in conventional orbital rockets. Because of these factors, as well as the age of the Dongfeng 5-based designs, China is building a new generation of Chang Zheng rockets to replace the ones that are currently in use. These are the Chang Zheng 5, 6, 7, and 8, which have been on the market for a few years now, but for the time being, the legacy vehicles are bearing the brunt of China’s hectic launch schedule. The Chang Zheng 4 was conceived as a backup to the Chang Zheng 3, providing China with some access to geostationary orbit if the Chang Zheng 3’s hydrogen-fueled upper stage development encounters any delays or issues.

Although the Chang Zheng 3 failed on its first launch, a second launch a few months later handed China its first geostationary satellite, rendering the CZ-4 design obsolete. Despite the loss of its intended purpose, the Chang Zheng 4A was reactivated in 1988 and 1990 to launch a pair of Feng Yun weather satellites into sun-synchronous orbit. Prior to Saturday’s launch, Chang Zheng 4C was photographed on the launch pad. The Chang Zheng 4 would not fly again for nearly nine years after these initial launches. Then, in May 1999, a new Chang Zheng 4B was released, with upgrades such as a longer first stage stretch. The Chang Zheng 4C, which first flew in April 2006, is a step forward, with the third stage redesigned to allow for multiple engine burns to be restarted in flight.

Both the CZ-4B and 4C are still in operation, and it was a 4C that launched on Saturday. Saturday’s launch was the Chang Zheng 4C’s 40th flight and the 87th overall for the Chang Zheng 4 series. 37 of the company’s previous 39 launches were successful, while two failed. The most recent failure happened in May 2019, and previous to Saturday’s flight, the CZ-4C had made thirteen successful launches since that failure. CZ-4C Y30 was the name of the rocket that launched on Saturday. Chang Zheng 4 can launch from Jiuquan, Taiyuan, and Xichang Satellite Launch Centers, which are three of China’s four main launch sites. Except for a single CZ-4C launch from Xichang in 2018, which launched the Queqiao communications relay in support of the Chang’e 4 lunar mission, nearly three-quarters of Chang Zheng 4 launches have been from Taiyuan, with the rest from Jiuquan. From either Taiyuan or Jiuquan, Chang Zheng 4 can achieve sun-synchronous orbit. The launch site for Saturday’s mission was site 43/94, which is part of the Jiuquan Satellite Launch Center’s South Launch Site. The South Launch Site includes two Chang Zheng launch pads, 43/94 for most uncrewed launches and 43/91 for China’s human spaceflight programs. At location 43/95 of the South Launch Site, smaller rockets such as the Kuaizhou, Chang Zheng 11, and Shian Quixian 1 can be launched. China’s third orbital launch of 2022 took place on Saturday, a month after the country’s previous launch, the Ludi Tance-1 01A mission, which was launched from the same Jiuquan launch site. Despite the significant delay, China’s next orbital launch might happen as soon as Sunday, with the Chang Zheng 8 scheduled to launch from the Wenchang Satellite Launch Center less than three and a quarter hours after the CZ-4C.