How Does Crypto Mining Work?

With the cryptocurrency mania in full swing, you can't help but hear about people mining these digital currencies, which is causing the graphics processor market to become unstable. This is what "crypto mining" is all about. 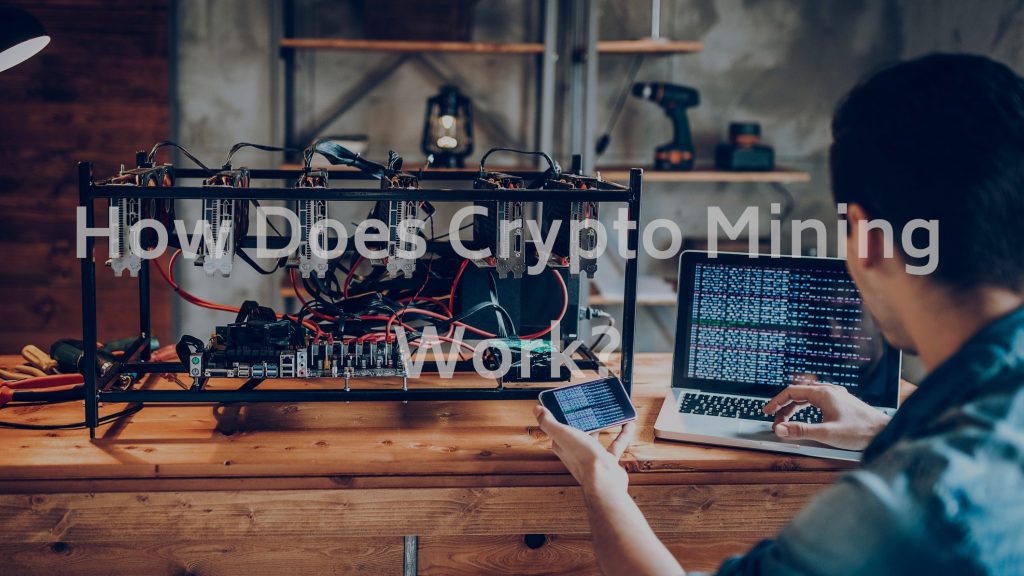 In a nutshell, crypto mining is the process of creating new cryptocurrency units, often known as coins. This form of mining, as you might expect, does not involve calloused hands grasping pickaxe handles. Instead, computer processors handle all of the heavy liftings, slicing through difficult math problems.

Of course, you might wonder why these digital currencies need to be mined in the first place: after all, they’re fictitious money with no backing other than what people are willing to pay for them. Real currency, the kind backed by governments, can be created by turning on a money printer, so crypto should be able to do the same.

Blockchain
For years, the fact that supply could not be limited was the biggest roadblock for cryptocurrency: there were a lot of ideas for how to make digital money, but no method to ensure that individuals wouldn’t just copy them at will. It becomes exceedingly difficult to govern the supply of any currency without an authority like a central bank—an agency that supervises the flow of currency.

For decades, this issue perplexed digital currency designers until Satoshi Nakamoto (possibly a pseudonym) devised something called the blockchain. The full theory of how these function is somewhat complicated—we go into more detail in our article on “blockchain” explanation—but the simplest way to explain it is to think of it as a chain.

Each link represents a block in this metaphor, and each block holds a specific quantity of cryptocurrency. One block, for example, contains 6.25 Bitcoin. You must answer a difficult mathematical equation to unlock a new block, which validates the block and adds it to the chain. You also have to proceed from one block to the next since the blocks are chained in a linear pattern; you can’t pick one at random.

The Book of the Ledger
Every time a new coin is released, it is recorded in the cryptocurrency’s ledger, a vast database that anybody can consult at any moment to discover which coins were mined when and by whom. The ledger also displays when a currency was exchanged and who was engaged in the transaction, proving that Bitcoin is not anonymous.

To summarize, the ledger on the blockchain tracks the creation and movement of currency. Validating new blocks and obtaining access to the coins contained within is known as mining. Because the blockchain must be finite, most cryptocurrencies have a hard limit on the number of coins that can exist: Bitcoin, for example, has a maximum of 21 million coins.

How Does Cryptocurrency Mining Work?
To unlock a block in the chain, you must first validate it by solving a complex equation, which is commonly expressed as a hash. A hash is a random combination of characters and numbers that, when combined with the correct key, reveal the original message; it’s a fundamental aspect of cryptography and the source of the “crypto” part of “cryptocurrency.”

Crypto mining is, in some ways, the same as solving these exceedingly difficult mathematical riddles. If you finish it quickly enough, you’ll get a penny as a reward. You won’t get one if you’re slower than the competition. “Proof of work” is the term for this procedure.

Hashes, on the other hand, are exceedingly difficult to solve by their own nature. It would most likely take millions of years for the phone or laptop on which you’re reading this article to solve one.

Supercomputers Made at Home
Of course, you can always build a supercomputer if you don’t have one. Many people interested in making money with cryptocurrencies, particularly Bitcoin, have begun doing so, frequently by connecting multiple machines to form strong networks that combine and multiply the processing capacity of each individual device.

In this example, the most powerful single component is a graphics processing unit, or GPU, which is the part of your computer that generates the wonderful glossy graphics—if you’re using a powerful computer, that is. They’re more efficient and powerful than their cousin, the central processing unit (CPU), and a large number of them can provide substantial computational capacity.

This introduces a new type of calculation, one in which numerous astute folks calculated that the cost of GPUs multiplied by the cost of energy came out to be a lot less than the value of one Bitcoin. This sparked a type of arms race, with these companies building bigger and better rigs to outperform their rivals.

Aside from the competition between these parties, there’s also the issue of each subsequent block being more difficult to solve than the previous one, a safeguard built into the blockchain to prevent it from being unlocked all at once.

As a result, the GPU market was almost decimated, with these gangs buying up all the units they could get their hands on—even stealing them in some cases—and forcing regular consumers to pay exorbitant rates even for versions that were hopelessly obsolete. Despite the fact that, as of late 2021, this arms race has slowed due to a variety of circumstances (including China’s ban on miners), the GPU industry has yet to recover.

The more claims you make, the more likely you are to receive blocked. It’s a sophisticated system, even more so than mining, but it could be the way cryptocurrency evolves in the future.

Mining in the Future
This leads us to a crucial conclusion: cryptocurrency does require a future beyond mining. Mining new coins are not only expensive due to the cost of power and GPUs, but it is also detrimental for the environment, as this Columbia Climate School paper reveals.

It’s difficult to say what that future will be: maybe it’ll be staking, maybe it’ll be any of the dozen other ideas crypto aficionados are concocting as you read this. We’ll have to wait and see.