Autonomous P-Flap ornithopter perches like a bird using a claw.

A brand-new design overcomes that restriction by momentarily perching like a bird thanks to a claw mechanism. 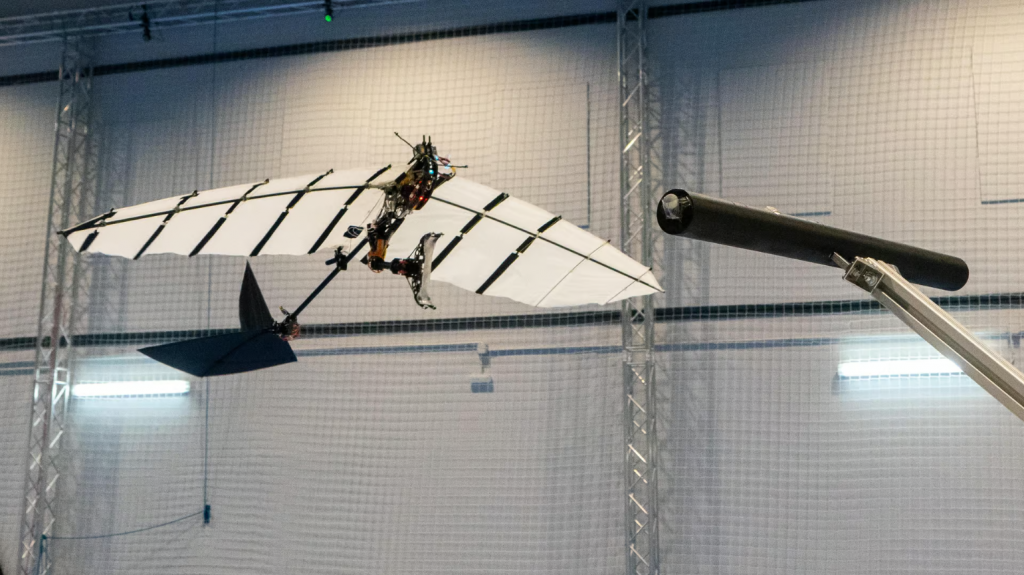 Although it’s possible that flapping-wing ornithopter drones will be more energy-efficient and agile than their fixed-wing competitors, the majority of them still can’t loiter in one place. A brand-new design overcomes that restriction by momentarily perching like a bird thanks to a claw mechanism.

The prototype autonomous ornithopter, known as P-Flap (Perching Flapping-Wing Robot), has a wingspan of 1.5 metres (59 inches) and weighs only 700 kilos (25 oz). Raphael Zufferey, a postdoctoral fellow at the EPFL research centre in Switzerland, created it.

Together with associates from the University of Seville in Spain, he constructed and tested the apparatus as a part of the GRIFFIN project of the European Union. “General compliant aerial Robotic manipulation system Integrating Fixed and Flapping wings to INcrease range and safety” is the meaning of the acronym GRIFFIN.

P-Flap is outfitted with a single carbon-fiber-bodied, spring-loaded mechanical claw that can grab objects like branches or pipes. Because of its bistability, that device can remain in both the open and closed positions without consuming any power. It is attached to the underside of the drone via a servo-activated leg that may be moved as required.

In its present indoor testing configuration, P-Flap is led by information wirelessly transmitted from an external motion capture system as it approaches a horizontal rod. The drone’s onboard flight control system can alter pitch, yaw, and altitude by using that data to determine where it is in relation to the rod and where it has to be in order to strike the target.

A linear vision sensor in the base of the claw offers more precise positional information once its claw is within 1 metre (3.3 ft) of the rod, activating the leg’s servo to position it precisely. P-Flap is held firmly in place when two protrusions on the open interior of the claw strike the target laterally. This pressure causes the claw to automatically shut around the rod in under 25 milliseconds.

A motorised screw mechanism in the claw’s shaft opens it back up when it’s time to leave the perch and continue flying.

The drone could theoretically carry out tasks like watching objects on the ground, collecting biological samples from trees, or recharging its batteries using built-in solar panels. However, there is still work to be done in the interim.

Because we require a regulated flight zone with exact localisation from the motion capture system, the flight studies are now conducted indoors, according to Zufferey. The robot’s autonomy should be increased in the future so it can conduct perching and manipulation activities outside in more unexpected environments.

In a publication that was just released in the journal Nature Communications, P-Flap is explained.